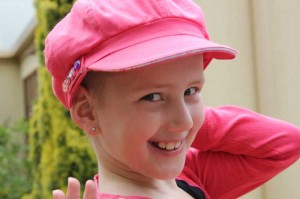 Hi, it’s James here.  Our lives have once again been shattered by the news that Olivia has  relapsed a fourth time!  Scans taken on 18 January have revealed 3 new tumours – two in her skull and one in her hip.  The bigger one in her skull is at the site that was previously deemed to be inconclusive after her last scans in November.  If only it had been confirmed back then, we could have been treating her 6 weeks earlier and may have even still been able to collect cancer free stem cells.   It is frustrating to know that a PET scan would most likely have confirmed the relapse, but they don’t have this facility at Sydney Children’s Hospital.

The realisation that Olivia had again relapsed was terrifying.  Whilst we have heard the prognosis from our doctors many times before, it doesn’t get any easier.  We know that Olivia is now facing the toughest battle of her life and we need to find a treatment regime in a hurry that is likely to benefit her.  Time is not on our side and we have been pushing the doctors to get the ball rolling, as the disease could be rapidly spreading throughout her body.  However, it seems as though there are so many obstacles in our way, including needing to test her bone marrow and once the results are known, discussing treatment options with specialists that don’t return from leave until February.

Given that Olivia currently has multiple lesions in different parts of her body, it is likely that her bone marrow is now infected.  She just had a bone marrow aspirate on Tuesday and we are anxiously awaiting the results which are due late this week.  We still intend to collect stem cells next week irrespective of whether she has marrow disease, as contaminated stems cells can still be of some use in an emergency if her marrow becomes too supressed – although that will be giving her cancer cells back!  She has failed to harvest twice previously, although this time, we will use Pleraxafor, the very expensive drug that we are hoping will stimulate her stem cells for collection.

If, as we suspect, her marrow is infected then we are facing her worse relapse ever, with minimal stem cells in reserve.   This will effectively limit our already meagre treatment options to those that don’t require stem cell rescue.

Once more we have been scouring the internet for treatment options and communicating with local and overseas specialists and other parents in similar situations.  Whilst there is no stand out emerging treatment, we have discovered a few treatments that we need to carefully look into.  We have always had the option of MIBG radiation therapy, although in Australia it is offered in relatively low dose, usually for palliative care.  We are mainly limited in Australia by supply, as treating just one child with MIBG requires over half of the weekly production of the radioactive material from Lucas Heights!  MIBG is used in higher doses overseas, often in conjunction with chemo, but requires stem cell rescue, which we currently can’t do.  However, we have been told that some kids do respond well to the low dose MIBG, so this will probably be our first treatment option, commencing in a few weeks time.

We met with a doctor from the Nuclear Medicine Department at Westmead hospital last week to discuss MIBG therapy.  We have been told that during this treatment, she will be isolated for approximately 4 days, with a video link to Kirsty and I in the room next door.  Thankfully, this treatment shouldn’t make her feel too unwell, although we expect that boredom will be a big problem.  We are limited by what she can bring into the room, as everything will have to be disposed of afterwards.  That definitely rules out taking in her new iPod!

It may be some months before we know whether Olivia responds to the MIBG therapy.  This should give us more time to plan some additional follow up therapies.

We have previously consulted with 2 Doctors in Melbourne who had mentioned a few new experimental treatment options.  They are trialling an Octeotide based treatment called Indium therapy that has demonstrated some effectiveness in another relapse patient.  However, this treatment requires the presence of Somatostatin receptors, which Olivia will need to be tested for.   We are taking Olivia to the Peter MacCallum Institute in Melbourne this week to have her tested for the Somatostatin receptors through a Gallium PET scan.  This scan will also give us a more accurate indication of the current extent of her disease, which could be very confronting.

Whilst in Melbourne, we will also be discussing another new treatment called Lu177 Dotate.

We still have the option of following up Olivia’s initial treatment regime with traditional localised radiation treatment, however, that will not eliminate the source of her disease, nor any bone marrow disease.   We are trying to avoid chemotherapy, as she has had so much of it in the past and has only had a mixed response.  However, if Olivia doesn’t respond to our planned radiation based treatments, we may be forced to put her back on chemo as an interim measure to attempt to keep the disease at bay whilst we arrange other treatments.

Even if we are fortunate enough to fight off the tumours that Olivia currently has, we know that more will come.  We need to keep treating her as though she has a chronic disease.  However, it’s a catch 22 situation; if our initial planned treatment regime is effective in eliminating the tumours, then she may become ineligible for most trials as it is then not possible to determine the effectiveness of any subsequent treatment.

We are currently looking into a new vaccine trial in the US that has shown promising results in very limited patients.  Depending on Olivia’s response to the any initial treatment regime, this may be worth considering to consolidate her treatment.  We have always been aware of treatment options in the States, though we have been reluctant to travel there unless they have a proven breakthrough treatment, due to the extremely high cost of medical treatment and having to again leave our family and friends.

Treatment decisions will not be made lightly and we will do whatever we can to try to save our beautiful girl, without overly compromising her quality of life.  We are not ready to give up on her whilst she is looking so well and she has indicated to us that she is prepared to fight.  We will know if the time comes that we will need to stop treating her, but we for now, we need to do everything that we can to help her fight this dreaded disease.